When Daveiga started in 2006, its owners could not imagine everything that came after. Its Mariñeiras cookies fight with the most innovative companies in Europe on the list drawn up each year by the Financial Times, a classification that includes companies based in Europe that experienced faster growth. This study, prepared by the prestigious British newspaper in collaboration with Statista, lists the 1,000 European companies with the highest growth rate in recent years. It highlights the entities that act as the driving force of the European economy. In 2018, in Daveiga they obtained the 503 position, then 548, with an accumulated growth in the analyzed four-year period of 315%. In 2020 they expect to have a presence again in this list dominated by entities from the technology, construction and services sector, with headquarters in countries such as Germany, the United Kingdom and France mainly. “It is just a ranking, but it brought us visibility. The merit is not so much to appear on this list, but as a bakery in rural Galicia is there”, says Xosé Lois Llamazares, the coordinator of Daveiga.

It is a monoproduct company, the Galletas Mariñeiras, but with many varieties within it. At the present time they produce about 5,000 kilos a day, which means about 26,000 bags, with more than one million kilos of annual production. Until 2009 it was a modest project. They had no positioning in the store. With the crisis they had to endure the pull. And already in 2013 is where the exponential growth begins. Daveiga went from having five employees, to today form a team of almost 70 people. Its business model is linked to the social economy. Workers have the option of being partners of the company. “Everyone who is stable, which is about 54, has that possibility, 35 of them are partners. This is a labor society. The promoter group continues to control the project, ”says Xosé Lois. The company is also part of InnovaPeme, the Galician Innovation Agency (Gain) program, which boosts the competitiveness of SMEs by supporting their innovation plans aligned with the priorities of the Galician Smart Specialization Strategy, RIS3.

The Llamazares family is made up of six brothers, and they are all in Daveiga. Three were promoters and the other three joined as financial partners. The project began with Xosé Lois, general coordinator, along with two of his brothers. Óscar was a appliances’ keeper, Carlos worked in a metal warehouse, and Xosé Lois was a local development technician. None of them had experience with bread. The idea came when they visited a brother who is a baker in Argentina. “We come that it was a product that could have a lot of acceptance in Spain. He made a similar product in Buenos Aires. At that time we wanted to leave our jobs in Vigo and Pontevedra to return to Rodeiro, the village where we are from. We thought about working with livestock, but suddenly the cookies came up”. They studied the possibility, and decided to start doing the Mariñeiras. The market perceived this as an innovative idea, when what it does is pick up a tradition. In Argentina, Uruguay, Colombia, Cuba or North America there was already something similar in dry bread. There they called him Mariñeiras. Then the Llamazares discovered that the name came from the ships that in the fifteenth century departed from the peninsula towards America. The origin was Spanish.

Boat bread or boat sponge cake was the way sailors found to preserve bread naturally. It is an old recipe now reformulated. Seafood biscuits are defined as a long-lasting dry bread and that is where their main characteristic lies in getting them to taste bread for a long time. This cookie has a resistance for the consumption of eight months almost without alteration, although “we have some samples that are two years old and are edible”, says the coordinator of Daveiga. It is a product that due to the characteristic of dry bread, with hardly any moisture, almost does not suffer alteration. “A cookie like maria type, if you leave it overnight outside the box, it will get soften”. Mariñeiras are called cookies by the way, but they are not sweet. They serve for breakfast or as snack. Bread without crumb had a good reception from the beginning. Its manufacturing process is similar to that of bread in the fermented dough.

They try to achieve this objective from two fundamental areas: the first is to give a character to the labor-intensive production process; the second, in which the raw materials are transformed or produced in the closest environment. This is the reason why they use wheat from the country by 30%. They also look for butter to be local, in addition to using extra virgin oil. As several seaweed producers found in Galicia, they make a variety with them, specifically with wakame. 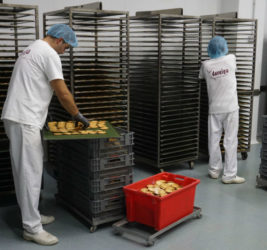 In Daveiga they consider that organic production is the one that can offer more guarantees to the consumer from the point of view of health. In 2007 they obtained the ecological certification. That was an absolute novelty. “We demand that the raw materials do not contain additives, and we do not incorporate them either”, says its coordinator. Precisely for this reason they are selling a lot in Portugal, where they have become a very popular product in the line of healthy foods. From this country they took the idea of ​​also incorporating chia or quinoa seeds. Another trend that has just been positioned this year is spelled wheat for people with wheat intolerance in the country. As for their internationalization, they think in the long term in the rest of the European Union.

Daveiga has received countless awards since the beginning of his career, both for its quality and for business growth and the social model. “What we like is to see that Daveiga showed that, with an alternative model, there is feasibility. If it is not for him, we would not have overcome the crisis. In the social part there is still a long way to go for our mode”, recalls Xosé Lois Llamazares. With this objective they are launching a program aimed at secondary and university education, to try to boost the rural from the perspective of social economy, sustainability and innovation.