Maybe customers, walking along the aisles of Ikea, El Corte Inglés or any department store, don’t really think about where they are truly stepping on. A steady and flat surface? Is it? Maybe! What is really true, according to concrete expert Eusebio Rey is that beneath your feet, thousand of chemical and physical reactions are simultaneously happening in an instant! Of which many people have dedicated many of hours of thorough research. It took Eusebio almost a decade of research into the world of dowright, flat and bright surfaces and pavements. No only the looks of it is important but the surface as a whole!
That was a paramount conclusion with extraordinary results. Thanks to Eusebio’s surfaces thorough one-long-decade-research, Prosistemas diverted the recession, which haunted the construction and real estate sector! They have now increased three fold their staff and doubled their yearly revenue. We’re talking about over 70 strong employees and 14 millones euros per year.


The quality of their surfaces is world’s top. Prosistemas has been rewarded with the Golden Trowel Award

Located in the heart of the industrial Estate of A Granxa, at Porriño, Prosistemas has raised the floor pretty high-no pun intended here. They have manufactured a type of innovative and high quality reinforced concrete in their Spanish high tech labs.  Over 4% of the annual budget goes to this type of concrete research. “Traditionally the machines and hardware we operate in warehouses and labs is way more advanced than the actual surfaces technology. We think about the hardware, which moves around pallets in storage or the merchandize really, but we never think about the surfaces, pavements or floors on which this hardware moves! In fact, we need the best surface for this hardware or vehicles or even humans to better operate this hardware and reach its full potential”, explains the founder of Prosistemas.
Inside a warehouse like those of El Corte Ingles or Ikea, the restocking of products and materials is non-stop on a daily basis. “Its not the same to move around on a pristine and flat surface to moving around on a rough surface, bouncing around for example. Its not a comfortable type of surface to move on. The floor or surface has a lot of wear and erosion due to the hardware and humans working on that very same surface”. The downside of a rough surface vs flat pristine surface is that eventually, the surface expands with the workload and heavy weight of the machinery, hardware and humans that exercise on that surface. 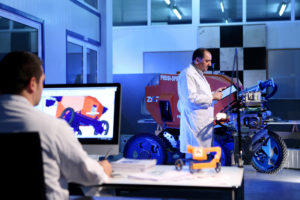 “If you have at least 1 meter of uneven floor, it doesn’t make much difference at the end of the day, however, if the floor or surface has been raised over 10 or 20 meters and you are working on it with heavy hardware and a lot of humans walking around, you start to notice a lot of uneven parts on the floor after a while and that works against the people and the hardware employed in the warehouse plus it slows down the processes of stocking, driving the vehicles, etc… You will notice this issue I’m talking about big time! The flatter the surface is, the higher it is the vertical or upright storage of things.”
So, Prosistemas, founded in 1984, began by gaining expertise in the field of manufacturing logistic, sports, commercial and industrial surfaces. From then on, research and studies in this field of chemical and physical processes was incorporated into the company ethos.  As time went on, they noticed a huge improvement not only in quality but in customers orders. This is really exciting for someone like the original founder of the company. So, to come up with a flat, even and hard and bright floor, which leads to lower expenses such as the electric and cleaning bill. Prosistemas has continued researching and bettering their concrete processes inside and outside the lab environment.


“If you don’t research these processes carefully then you cant get the right quality concrete!”

“In the lab environment we have observed these mechanical, chemical and physical processes, how to avoid pervious resulting concrete. You must innovate, research and come up with something more advanced and better. If you don’t research you won’t be able to find out the best you can do it, knowledge and research in this business is everything!”, says Eusebio Rey. You must observe and test the materials and follow their life span and evolution before you installed them and after you’ve installed them even 30 years after their first use. Prosistemas has been working out a scientific way to improve the processes and the final product.
That’s the way they have achieved great quality surfaces like the one of over 200.000 m2, belonging to one of Inditex warehouses. They built also a tower to hang clothes for inditex, which is a world record! Over 17.300 m2 big. They have also set up several surfaces for Ikea, just about 100.000 m2 of floors, which possess high planimetrics  and are rubbing and friction resistant. The companies based in Spain like FNAC,  Leroy Merlín, Día etc… are many of the corporation hiring  Prosistemas services in Europe and Asia. They work face to face with customers not construction companies, though.
César Pazos marketing director states: “its not a cheaper product but perhaps the most expensive, and clients are choosing quality over low prices. They understand that this kind of investment gives you a return in less than 3 years”.

Thanks to their “scientific surface”, last Feb 6th, Prosistemas’CEO travelled all the way to Vegas to collect the World of Concrete 2015 diploma aka Golden Trowel Award. Prosistemas has been the first European company to pick up such a prestigious and world renown award. For many companies worldwide, this is the Oscar of surfaces, concrete, pavements and high planimetrics.
“We got here almost by the toss of a coin sort of say…”, acknowledges Eusebio Rey. He was working in the USA doing the same business and the company was undergoing the odd standard quality controls, however, when the US administration started implementing high quality controls, Prositemas soon realized that their product was top notch!.
“We suddenly, one day, were told that we should enter the Las Vegas contest, and we hinted we could win it in fact, so, luckily we ended up winning the big prize!” points out nostalgically Eusebio Rey, who says this is an international acknowledgment that’s given to a very few worldwide.

Innogando, the new livestock is here

Envita, life stories to improve the care of the elderly

NutriGen 4.0, a bet towards healthy eating based on innovation