There are seaweeds, with such an intense flavor in our oceans, that remind us of crustaceans and they even taste way better than the traditional seafood. There’s one unique Galician seaweed, which is called “alga percebe”(barnacle seaweed) and when you taste it, is easy to tell why it is so unique. Galicia is so green and productive and not only its land greens are so good but also its sea greens are delicious. It’s seafood is not the only rich and gastronomic delicatessen but its sea and coast are populated by a plethora of algae and seaweeds, 25 out of over 200 seaweed species are of great nutritional potential for the top chefs and yet unknown to many.
It’s all a cocktail of vitamins minerals and oligo-elements which are highly popular in all Galician kitchens and are brought to the table by Grupo Nove. This company is at the avant guard of the Galician cuisine. They’re asking for seaweed as the protagonist of the new dishes.

To unravel, recollect, process and preserve this potential and traditional dish without losing its original taste and properties Sergio Baamonde and Alberto Sánchez have been putting a lot of effort and ingenuity into it for over 3 years from the sea coast of Ortigueira. It is this sea line the most dangerous , rugged and wild of A Coruña.
Ferrol pals and school mates since childhood; the latter studied Marine Biology and the other Sea Sciences. After walking different paths for years they were reunited in 2012 due to a project about making the best of sea greens as they coined the term. This is a food which is completely ignored in Spanish cuisine but a deli dish in Asian cultures. 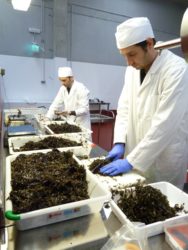 “100% traditional , organic and Galician”, this is their motto and  Conservas Mar de Ardora, their brand. Ardora is the silvery shine which is visible due to a unique sort of microscopic cold water sea weed, which also relies on certain tides and northern wind. The moon shines on the  salty water with magic qualities. And under this commercial umbrella they offer green, purple and red sea weeds or “nori” which come fresh, dehydrated or canned. They’re suprisingly whimsical like the spicy sea spaghetti , or the sweet quincy Kombu weed, and incredibly delicious to the most demanding palate.
“Mar de Ardora S.L. is a dream come true”, say their marketers, “it’s the starting gear of a traditional food canning factory which work with different types of vegetable marine foods”.
Three years ago they managed to open up this canning company in the industrial estate of  Rego-Cuíña (Ortigueira). And now Sergio and Alberto have taken off in a niche seaweed market which very few Galician companies can compete with them. The main difference is that they offer fresh and hand processed  seaweed which preserve the produce and texture better. Moreover, they’re organic certified (Craega).
These two young entrepreneurs, pushing only their forties have to dive literally speaking to get their produce. Both of them are by now the only owners, partners  and employees of a self managed and profitable company.