Creativity, art and technological innovation are the foundational parameters of Maxina’s philosophy, an audiovisual study group in A Coruña, Spain. Despite their short existence, they have already had the opportunity to show their talent in places like the Guggenheim Museum in Bilbao. Although it is not the only discipline which they swim around, virtual reality has become their banner. Maxina’s study group was born out of the artistic input and professional collaboration of two siblings, Noela and Carlos Seijo.

The business project was born about five years ago, however the Seijos had already been working together since they were very young by making short films. Noela is an architect and Carlos studied Fine Arts. Likewise, both of them have been very interested in ventures that have to do with art and creativity. Three years ago they became interested in the possibilities of virtual reality, a world that fascinated them from the very beginning. 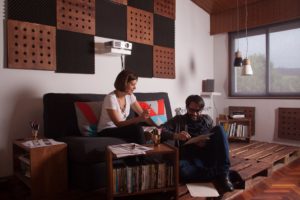 Among the virtual reality projects that have been developed so far is the recreation of the art studio of the British painter Francis Bacon, which could be seen at the paramount exhibition, which the Guggenheim of Bilbao dedicated to the Irish born artist at the end of 2016. Seijo explains that this work allowed Maxina to develop some of the most important qualities of virtual reality, which can allow time travel and have direct sensory experiences such as touching the objects of the artist that currently can not be seen because Bacon’s real studio is protected by glass and is not accessible.

Projects related to art and heritage are preferred by Maxina’s developers, although they have also done more business-oriented work. “The problem presented by virtual reality to extend to a large market is that to access the experience would need a wide range of devices to share the experience with many people. In any case, slowly, things are changing and companies like Facebook or Google are starting to take a liking for virtual reality, which can open new unexplored pathways, “explains Carlos Seijo.

Maxina has been working in and out of Galicia and now they have just opened new headquarters in Santiago. “We have permanent contact with Galician companies and we hope to continue working with them in this field in the future,” says Seijo.