Imatia´s success on the trade is based on winning several awards such as the Galician Spin-off company within the ‘Seal of Approval’ category. This is a great example that a company born and bred at a college can stand the test of time without forgetting its roots and identity such as innovation and diversification. This company has specialized since the very beginning in fast software targeted to administrations and corporations but has not turned away from exploring other business pathways of development.Thats one of the reasons why they are still in the innovation area; a culture, which always has always been the ethos of Imatia. 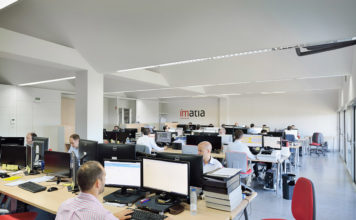 Fernando Vázquez, CEO of Imatia, explains the seed of their company has always been linked to the college research group DASA-created in 1995, in Vigo. 10 years later Imatia was born, right at the same period of time, which the new Spin-Off-Company-Incorporation law came into effect . “Right about  1995 we had thought of some ideas and projects, which were quite ahead of their time, eventually, scanning the trade worldwide, we realized that in order to succed really one must start from their locality and create employment and wealth around there, then from there on, you must keep expanding. Our main focus has been to create technology in Galicia and then sell it overseas”, says Vázquez.

Nowadays, Imatia has a client portfolio that includes the 5 continents and they employ over 100 people. Vázquez feels that his company had great support and a financial injection at the beginning when many administrations and companies started buying their products opposite to what the international corporations were offering to them at that time. “I believe that college professors, like myself, are privileged to do what we like to do and we have to give back to society what society has given to us initially. There are about 6,000 college professors in Galicia and its very important they can make a contribution to the job market locally”, he points out.

This year is the first time, we have managed to open a branch of our company in Brasil and theres even a vested interest in expanding further, especially in Latin America due to unparalleled opportunities there. Lately, Imatia has developed a brand new project in Africa, in Morocco to be more precise, and they have marketed a computer-vision-device for trains. Amongst the portfolio of clients we can find large corporations such as Inditex or PSA Peugeot Citroen, even the US Air Force, The Regional Galician government Xunta or Adif.