We have a clear and fresh picture of chestnuts because of the magostos (Galician chestnut seasonal party), but out of season chestnut consumption has been decreasing. They were a part of our diet before the dawn of the potato and corn brought to Europe from America. In the days of the industrial revolution, people left rural areas to move to the cities, chestnuts were very popular and now chestnuts are back in the menu, in fact theyre back to mitigate the hundreds of allergies which plague the guts of the current city dwellers. Basically, no one is allergic to chestnuts, and the food industry has realized that chestnuts are healthy and they have begun to bring them back to the consumer.


The company has been exporting almost all of the chestnut harvest

This idea has popped in the head of the promoters of the project Senalergal, a joint effort of 5 Galician companies to prevent bad digestions due to allergies. The branding is led by Alibós, Daveiga, Montiño, Prestes, Kiwi Atlántico and Bioselección, specialized, respectively, in chestnuts, cookies, cold cuts, cheeses, kiwis and organic produce. The project, which has been financed by the Axencia Galega of Innovación via the program Conecta Peme, and has allowed these companies to produce pastries and cold cuts or delicacies gluten free and cheeses without lactose. That’s great news to those of you who are usually allergic to these foods. 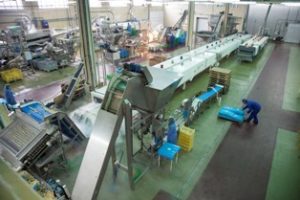 At Alibós (the acronym stands for Alimentos del Bosque-Forest Foods), they looked at chestnuts way back in the 80s; after an initial stage of mushroom harvesting, they have now become one of the major producers in the Galician chestnut trade in Spain. Almost, all of the chestnuts purchased and processed by this company, collected and harvested, are handpicked, peeled, frozen and exported overseas.
Alibós processes over 6 and 7 million kilos of chestnuts per year. They have to purchase so much chestnut that the Galician production is not enough and have to look at places like Portugal or Cáceres to acquire even more. So far, they have had to purchase chestnuts but now they have been working on developing and harvesting this produce in areas like A Ulloa. Firstly, This will help bring the chestnut groves back to life. Secondly, they are going to attempt to get both symbiotic partners together back again, chestnut trees and mushrooms. Moreover, this will help bees return to the forest and thus boost chestnut pollination. The ecosystem will thrive again should this one-of-a-kind-idea prosper. The chestnut crops range from such places like Lalin and Agolada to Os Ancares, The sweet revenge of the chestnut is on its way.