A year of research. A team led by María Isabel González Siso and José Manuel Leiro Vidal. A very clear idea: to design a vaccine against Covid-19 that can be produced in yeast. “In reality, this project is based on a technology that we were already developing for other types of vaccines”, explains the researcher, who is also Professor of Parasitology at the University of Santiago de Compostela (USC). In any case, Leiro appeals for calm and patience. “A very interesting field is opening up for in-depth research, but it is so different that there is still a long way to go to develop it to its full potential”, he says.

As he goes on to explain, his regular work in the lab focuses on designing vaccines against parasites, especially in fish. And from these studies —together with Gonzalez’s ideas— the idea was born. “When we work with parasites, it is often difficult to obtain and know the antigens. Therefore, we use the pathogen’s proteins and produce them ourselves, expressing them in yeast“, says the USC researcher. At the same time, he clarifies that there are many expression systems: from bacteria to human cells.

On this basis, directly linked to the daily work of the two principal investigators, they decided to apply their knowledge to SARS-CoV-2. And to open up, perhaps, the possibility of designing a vaccine that is expressed in yeast. “We choose these organisms because they do not have any toxicity. More specifically, we use those from the fermentation of milk and bread”, says Leiro. At the same time, he insists on the innocuous nature of yeasts and reminds us that they are present in everyday foodstuffs.

“We choose these organisms because they are not toxic”

“Yeasts play the same role as cells when they are infected by the virus”, says the researcher. Therefore, they are capable of producing the proteins of the pathogen  —in this case, SARS-CoV-2—. In addition, yeasts can produce changes in proteins by adding sugars that enhance the immune response. In other words, the team headed by González and Leiro chooses the proteins that can be protective and expresses them in other systems and organisms, which in this case are the yeasts used in the food industry.

Difference with other vaccines

But… What is the difference between this vaccine model and others on the market? According to Leiro, the only thing they are getting is a protein synthesised through yeast, but it has nothing to do with the use of messenger RNA, as is the case with Pfizer and Moderna sera. Secondly, the other vaccines use a very specific SARS-CoV-2 protein, spike. However, Leiro’s team adds at least fragments (peptides) from three proteins found on the surface of the virus. These peptides are apparently selected using bioinformatics programmes that predict their ability to stimulate the immune system.

However, Leiro also points out the complications that can arise from this project. “Working with these chimeric synthetic proteins has a problem. When you build them yourself, you run the risk that they don’t look very similar to the natural one. That’s why we need to do structural studies that reveal whether this protein can generate an immune response when it is inoculated,” says the USC researcher. Another drawback of this technology is related to yeast. “We don’t know if these organisms, in the end, consider synthetic proteins as something foreign and try to eliminate them. Moreover, we want them to secrete it, to expel it, but for that they have to pass through the yeast walls, which are very impermeable and selective,” adds Leiro.

In any case, the USC researcher points out that the “process is quite fast”. The difficulty lies in producing this type of recombinant chimeric proteins in large quantities. “This whole initiative is quite innovative, but there is still a lot of research to be done behind it,” Leiro acknowledges. He continues to insist that his project is promising, and predicts that it may have another advantage: “To tell people who are afraid of vaccines that ours is based on something natural, that they are produced in organisms that are eaten. It’s very innocuous,” Leiro reflects. He is well aware that his project is full of hope and enthusiasm, but that it also requires patience and financial support from institutions. His goal: to achieve an innovative and technologically transferable product. 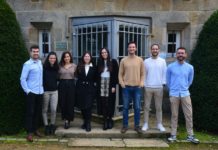